There may not have been a red carpet (or even a red rug for that matter!), but what was there at the Millennium Film Workshop this past Friday in New York City was a full-throttle evening of epic proportions filled with positive energy and heaps of enthusiasm.

An unprecedented turnout for the Cerise Big Apple Preview!

The Big Apple Preview of Cerise was, to say the least, a smash success. With a head count of at least ninety to a hundred attendees, the small theater space in the East Village went from empty to standing room only by the time the festivities got underway.

And as many of you may know, this was not just an ordinary film screening. The Big Apple Preview was a full-fledged event with many surprises. Here are some of the highlights of the evening:

“Man Versus Word.” The first thing people saw after descending the stair to the Millennium Film Workshop was our ginormous Cerise poster, designed by local Jersey City artist and good friend Lauren Clemente. Blown up to full size, it was simply a wonderful sight to behold!

Artist Lauren Clemente and I with the ginormous Cerise poster she designed.

“I’ll drink you up as the lights go down” Let’s just say everyone in that audience that night got a much needed flu shot. Icewagon Flu, that is! The boisterous band was in the house performing an acoustic set for our enjoyment. They played their latest single “Drive the Spirits Out,” along with “Talk To Me” and “Cerise,” which was written and performed by the band as a donation during Cerise’s IndieGoGo crowdfunding campaign. Perhaps biggest highlight for me (besides finally seeing these boys rock out live) was when frontman Kevin Adkins lead the crowd in a chant spelling out the word “cerise” to the music as I made my way to the front. It was truly epic! 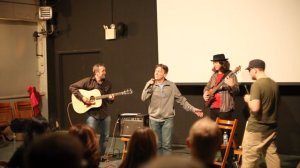 The myth. The legend. Icewagon Flu!

As an added bonus, Icewagon Flu also offered up free CD singles featuring “Drive the Spirits Out” (available on their site as a free download as well) and “Cerise” as the B-side (how cool is that!?)

“We’re the crazy sad family no one wants to talk to!” The next treat for the hundredfold cinemaphiles packing the place were five trailers for other crowdfunded films, all of which were from supporters of Cerise––namely Mahogony J. Slide’s drama The Saving, Robert Lise and Sam Platizky’s zomb-com Blaming George Romero (which features a cameo by yours truly!), Phil Holbrook’s thriller Tilt (penned by the inimitable duo Julie Keck and Jessica King), Mattson Tomlin’s dark retelling of Solomon Grundy, and Gary King’s musical How Do You Write a Joe Schermann Song. Aside from being awesome, fun trailers, each of these films represents the changing face of independent film, and I really wanted to give back to those who gave to Cerise by helping them gain potential new audience attendees when these films debut in 2011. Based on the crowd’s reaction to these fabulous trailers, it was a success!

“And here we are, Sam, the match of the month!” The lights went down (well, I switched ‘em off from the side of the room) and I watched a year of my life shine out into the eyes of the audience from a much bigger screen than I’m used to. Like always, there was a war waged between the Godzillas in my mind and Mothras in my belly; although this is the fifth film I’ve screened at the Millennium, that fearful question still creeps up from the back of my mind, much like how the word “cerise” creeps back into Josh’s: Will they like it? 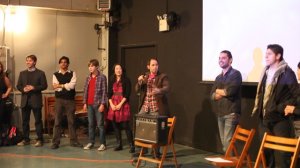 The cast and crew of Cerise.

When the credits rolled, the battles had subsided and the monsters were buried by a great earthquake of applause that made a smile curl across my face. Based on many of the comments I’d received from certain audience members who waited around just to tell me that they enjoyed the film, Cerise was a success!

“For Marinell––” I wanted to make this first ever screening of Cerise a little extra special for one person who’s extra special to me. As the scrolling credits trailed away, a deleted scene flashed onto the screen in which Josh wears boxing gloves and sports a black eye. Behind him, Josh’s love interest C.J. massages him, pumping him up he rushes off––a new man filled with new inspiration. After that brief scene which prior to this had only been seen in the first Cerise teaser, a message faded in: “For Marinell––” the one person who deserves all the credit for putting together the Big Apple Preview, who also pushes me to stay at my fighting weight, for she’s truly “the coach in my corner championing me towards a knock out.” 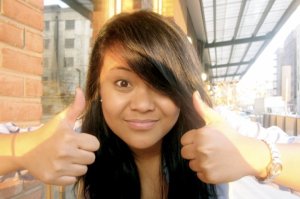 Marinell Montales (@Merrynell), the coolest gal this side of any lifetime!

“I’m NOT gonna let you finish…” Following the screening, I called up members of the cast and crew and (apparently) went through a long-winded speech filled with Academy Award-style thank yous and the like, and I was simply astonished when Cerise’s leading man, the extremely talented David Arkema, snatched the microphone from my hand and complimented me on not only making a quality film, but also on the amount of passion that I have for everything that I do, that same passion that made him want to play Josh and help bring Cerise to fruition; and that it was that same passion, he said, that filled every seat and side corner of the Millennium Film Workshop on this Friday, December 3rd, 2010.

Those were the highlights, like the glimmering beads of a Kombolói. But like any Greek bead collection, those gem-like beads are held together by the chain links of everything else that comprised a perfect evening––from conversing over wine and cheese and shrimp cocktail and fundraising for film festival donations to choosing the mingle music (my “Underdog” mix) and raffling off swag bags designed by another excellent Jersey City artist and buddy Matt Caputo. And all the spaces in between those links of chain? The love and enjoyment from all the wonderful people who came out to support Cerise, my latest and greatest creation!

As an added bonus, here’s a short clip of some of the highlights that Cerise “Samurai of Cinematography Alain Aguilar put together from the night.

On a side note: Yesterday, I showed the students in my Civilizations 2 course Charlie Chaplin’s The Great Dictator, and for the first time (after seeing this film about four or five times) I got a tad bit emotional during the film’s finale––Chaplin’s heartfelt speech praising the goodness of humanity.

I believe I experienced first hand a piece of that goodness this weekend, and for that, I’m truly grateful, and I sincerely want to thank you al once again for being a part of that magic!