Last month, for #ThrowbackThursday (or #FlashbackFriday), I posted an image of the first CD I ever purchased –– Bat Out of Hell II: Back Into Hell, Meat Loaf’s “follow-up” to his debut album Bat Out of Hell from back in 1977. It spurred on some swell conversations on Twitter between myself and a bunch of other Meat Loaf fans. @RealMeatLoaf even  favorited the photo.

I think it’s safe to say that we’ve all heard the classic songs from the original Bat album –– the evocative seventies sex, love, and rock-and-roll anthem “Paradise by the Dashboard Light”; the melancholy “Two Out of Three Ain’t Bad”; and, of course, the title track that pits us in the pangs of a one-night stand gone awry.

Then, with the release of Back Into Hell in 1993, the motorcycles revved, the electric axes wailed through a familiar fog yet into an all new ‘90s sensibility with the unforgettable “I’d Do Anything For Love (But I Won’t Do That)” –– and it always baffled me how I seemed to be the only person who understood what it was that Meat and writer/producer Jim Steinman “wouldn’t do” for love.

Once I got through with these two albums, I embarked on a quest to discover what other Meat Loaf albums were in existence. It wasn’t as easy as it is today to discover and even listen to Meat’s entire repertoire with just a few taps of your fingers on a keyboard. Back then I actually had to go from music store to record shop, from Sam Goody and Nobody Beats the Wiz to Bleecker Street Records discover new music on vinyl, CD, or cassette.

And it was on one such trip that I discovered Meat Loaf’s sophomore album, Dead Ringer, released back in 198. One thing that always immediately struck my fancy with Meat Loaf albums were the covers, and this one by noted horror artist Bernie Wrightson was no different –– a macho Fabio kind of cat riding through an ocean and accosted by nymphs or sirens, and the word “Meat Loaf” emblazoned on the sails and carrying the songs through the waters and into our ears. It’s easily one of my favorite covers of all time, one that captures the entire essence of the 1980s era of music, and also resounds with dark allusions to Homer’s Odyssey.

Now I didn’t know it back when I first listened to Dead Ringer that it truly was an album of comparable quality to Bat Out of Hell. With lyrics yet again by Steinman, who wrote both Bats in their entirety, and Meat Loaf’s signature sound and flare for the dramatic, I played side A of my cassette tape numerous times before popping it out of the deck, turning it over, and playing side B, which ran through the tape with just as much vigor and heartbreaking guitarmanship as the previous side.

It’s probably been a good seven years since I’ve listened to Dead Ringer, so I recently dug it up on Spotify, and I was instantly reminded of just how solid an album it is. But I also really listened to the lyrics of each song –– I mean really listened to them, with a mind full of different experiences and a more refined sense of  and how beautifully messed up they were, more so than even the most sultry lyric in “Paradise.”

My top four Dead Ringer favorites are “dead ringers” enough of this:

“I’m Gonna Love Her for Both of Us”

As if the title alone doesn’t say enough (or too much), the lyrics themselves go a step further:

So basically, a guy tells his buddy he’s fed up on how he’s treating his girl. Now, if that isn’t enough, the chorus get’s even more intense:

“More Than You Deserve”

This whole song burns with empathy for the main character, who loves a girl, but this girl “makes love” to his best friend. Things escalate to epic proportions when this guy sees her making love “to a group of [his] best friends,” but it also throws it in their faces, too: our narrator ultimately comes out on top, so to speak, when he finds the courage it takes to “look them right in the eyes” and say:

“I’ll Kill You If You Don’t Come Back”

My favorite lyric in this song happens at the bridge, where the music slows down, becomes a ballad, in which Meat Loaf “blesses” all the different types of high school girls, and out of all of them, there’s just “one girl [he’ll] never forget.” (It starts at the 4:02 mark in the above video, though much of it’s power comes from listening to the entire song.)

The most heartbreakingly beautiful ballad since “Two Out of Three Ain’t Bad,” and we’ve all been here before, but Jim’s lyrics, coupled with Meat Loaf’s painfully honest rendering of these lyrics make this song a heartache and a half, putting into words the fact that some feelings just can’t be put into words:

It’s funny –– when I was younger, I remember listening to the lyrics of “Bat Out of Hell” and envisioning an epic scene about a motorcycle jacket-clad hero who rides his bike, crashes and is “dying at the bottom of a pit in the blazing sun,” and all that. And perhaps that’s really what the imagery Steinman and Meat Loaf want us to envision. But why was he trying to escape “like a bat out of hell,” hmm? Same reason the guy and gal in “Paradise by the Dashboard Light” go back and forth in the sexual scoring metaphor of a baseball game: guy wants girl; girl wants guy to promise forever else guy won’t get girl’s “forever”; so guy either says “I do” and tries for the hit and run. Wash, rinse, and repeat.

One other thing I couldn’t help notice about Bat Out of Hell and Dead Ringer is that they both follow essentially the exact same track format. The heavy growling opener (“Bat Out of Hell”/“Peel Out”); the sultry siren song (“You Took the Words Right Out of My Mouth”/“I’m Gonna Love Her For Both of Us”); the soft-spoken ballad (“Heaven Can Wait”/“More Than You Deserve”); then we kickstart back to a bit of fast-paced action (“All Revved Up with No Place to Go”/“I’ll Kill You If You Don’t Come Back”) before going all rock ballad again (“Two Out of Three Ain’t Bad”/“Read ‘Em and Weep”); and disregarding “Nocturnal Pleasure” as an intro to “Dead Ringer for Love” the way the whole “On a Hot Summer Night” bit introduces us to “You Took the Words Right Out of My Mouth”, there’s the duet (“Paradise By the Dashboard Light”/”Dead Ringer for Love”); and finally, we end with a heartfelt, thoughtful closer (“For Crying Out Loud, You Know I Love You”/“Everything is Permitted”).

Hey, if it ain’t broke, then it might just be a dead ringer for success. 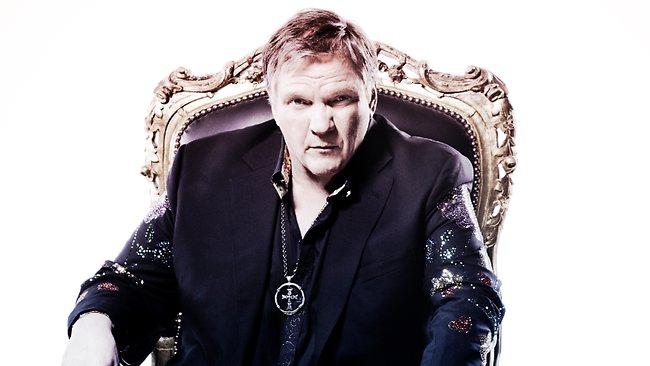 And for those of you who aren’t aware, Meat Loaf is still churning out the rock & roll tunes, and he’s also not holding back on the crazy lyrics. Here’s one of my favorites off one of his more recent studio albums from a song called “California Isn’t Big Enough”:

So what’s your favorite crazy Meat Loaf (or any) song lyric? Fill ’em up in the comments section, folks!

1 thought on “A Real Dead Ringer for ‘Loaf: A Brief Look at the Second Helping of Meat”