I’m very proud to present to you all one of the crowning achievements of my entire life (thus far) –– My TEDxJerseyCity talk called “Crowdfunding Today, Tomorrow, Together.”

Since it’s only a seventeen-minute talk, I’m pretty confident you’ll all watch the entire talk. But if you only have a few minutes, and if you’re toying with the idea of running your own crowdfunding campaign for a film, product, or anything else, then I highly recommend you scrub toward the end of the talk (11:03, to be exact), when I begin talking about my new and improved “Three INs,” presented as the “Three Is,” as in the letter “I” (you see why it didn’t stick, I’m sure) during my talk.

See, around five years ago, I unveiled my “Three Ps for a Successful Indie Film Campaign” –– Pitch, Perks, and Promotion ––  which paved the way to my book Crowdfunding for Filmmakers. Well, as crowdfunding for indie film evolves, so did those Three Ps. it was during this TEDx talk that I introduced the Invitation, Incentives, and Interactions as three ways “in” to your crowd’s hearts. A new Medium post outlining them in more detail is coming soon.

From talking about a plethora of local campaigns to ones like the JIBO and Solar Roadways, which are paving the road to a more sustainable and Jetsons-esque future, to talking about vampires and how El Diablo knows how to listen on social media, I think you’ll get a kick out of my talk, and perhaps it’ll even inspire you to make something you’re passionate about a reality.

Special thank to Alicia Ruth and the most excellent folks at TEDxJerseyCity for getting this up and running on the TEDx YouTube page and on TED.com, and, of course, to my darling Marinell, who watched my talk five times today and realized this very important thing: 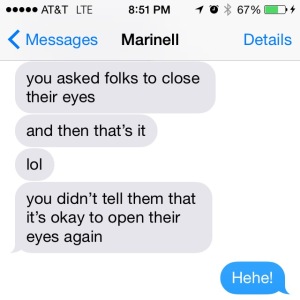 I trust that by the end of my talk, their eyes –– and all of yours –– will have been opened in the widest of ways.

4 thoughts on “TEDx Talk: “Crowdfunding Today, Tomorrow, Together” Is Here”