Back in January of this year, I published this blog post, appropriately called “New Beginnings: Taking 2018 By Force.” Little did I know that it’d be 2018 that would take me by force.

Or perhaps by choice?

I felt something in the air that day. Earlier that morning, I got my first ticket for not stamping my Light Rail ticket because there just so happened to be transit cops at the Hoboken Terminal stop. (Yet another reason for me to dislike Hoboken.) I even told one of my coworkers about it, and in typical Taoist fashion, I remarked “well, it happens. I have more than my fair share of great days. It’s time I got a not-so-great one.” Twenty minutes later, I was called into what used to be my favorite conference room, decked out in mostly faux wood desks, and it’s there I was let go and asked to exit the premises.

This year, I’ve often commented –– mostly in jest –– that my 40th year (well, 41st year) has been one heckuva year, and that I can’t wait until February, 2019. Between struggling with my Buffy-Cat’s lymphoma to dealing with a strange boil on my arm, it quite honestly hasn’t been the most amiable of years.

But everything happens for a reason, right? And it’s always for the Right reason.

It’s been about three weeks since I was let go from a job I’ve held and excelled at for over five years, and I’ve come to the realization that this was the best thing that could’ve happened.

In this life, along this journey, sometimes we are given a Campbellian invitation to go on a new journey. Before I joined the company’s film team, I had been a freelance professor of humanities, English, and lots of other subjects that didn’t involve numbers, my invitation came in the form of a Tweet, and after much deliberation, I accepted the offer to leave my not-so-cushy “adjunct hustle” lifestyle to give campaigners advice on how to run better campaigns. I never imagined I’d have made it five years, continuously putting my skills, compassion, and love of indie film to its best use possible. Man, what a journey it’s been! And what growth, too.

Other times, we are simply thrust into unfamiliar terrain without any actual invitation, leaving us with little or sometimes no choice in the matter. Luke Skywalker’s leaving Tatooine after his aunt and uncle are murdered by the Empire in Star Wars. Prior to that, when invited by Ben Kenobi, he refuses because he has responsibilities to his moisture farmer guardians. Once they’re out of the picture, though, there’s nothing for him on Tatooine, and so he is thrust into the new world of the Rebellion. Sometimes we have no real choice, and we are sent away from the home we’ve known and grown up in for years, the way parents will gently nudge their kids out of the house when they hit 18, and must step out into the unknown, with the Universe (or in Luke’s case, Obi-Wan and The Force) as our ally to guide us, should we choose to accept its silent guidance that always has our best interests in mind. Because the fact is that when the growing in one place is done, we must seek new horizons toward which to aspire in order to further grow our full potential.

So what what my personal growth plan looks like for the next six months? (Or most likely up until my 41st birthday.) Lying low and figuring out what the next chapter of my life has in store for me. (That’s the beauty of having a solid savings in place, and I have my Dad to thank for instilling the “rainy day” mentality in me.) In a sense, I’ll be figuring out what I want to be when I grow up (again), all while trying not to actually grow up. I’ve done that twice before, and I found my way back to the person I am right now. But here are a few things I’m looking forward to with my time away from the working world:

That’s it. No full-time work except writing and the occasional freelance work writing and consulting when I can get some. (As much as I’d love to leave the world of crowdfunding behind, I’ve made a name for myself in that world, and it would be a disservice to the two editions of my book and the many creators I’ve helped over the years. Sure, I might have to cut down on the third wave coffee at some point, but we’ll cross that bridge when we get to it. It’s like my pal Joe wrote in my 40th birthday card: “We give our 30s to the ‘Man’ –– But the 40s is where we give to ourselves.”

How right you are, my brother. Now I can really start taking the rest of 2018 by storm.

And the rest of my life, as well. On my terms. See, what I’ve learned from all this is that, to quote Matthew Broderick (again –– I’m pretty sure I’ve quoted him once before in another post) from Ferris Bueller’s Day Off, “Life moves pretty fast. You don’t stop and look around once in a while, you could miss it.” Over the past five years, I didn’t realize it, but the company and I forged a somewhat symbiotic relationship. Little did I know or realize, it had ultimately become my alien costume, consuming my natural colors beneath its black and white way of looking at its mission, and that had become my mission. And that wasn’t a bad thing, until it started becoming the only thing that mattered. 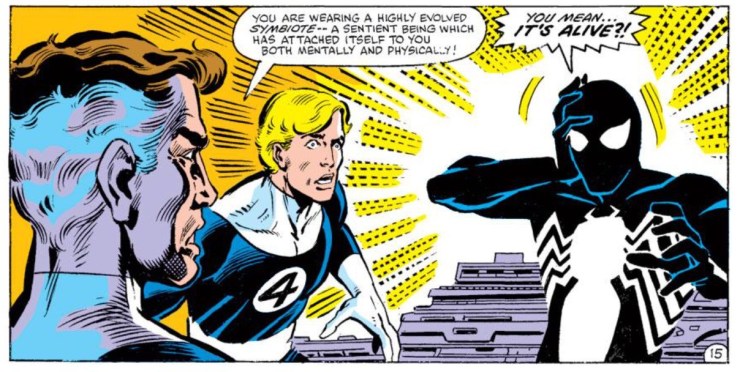 But alas –– I’ve broken free from that interdependence –– or rather, they set me free, which is the same thing, really –– and now I can take a little or a lot of time and find my way back to the things in this life that truly matter, and the individual identity I inadvertently lost sight of in the dark.

Or,… perhaps it’s time to create an all new identity from scratch. Like that BMW commercial tells us, “sometimes you have to unfollow your old dreams to chase new ones.”

Well, we’ll just see about that.

2 thoughts on “From Interdependence to Independence: A New Journey Begins”