On Cinco de Mayo, traditionally a time for celebration and revelry, my short film Cerise screened at Bergenfield Film Festival in my home state of New Jersey. “Screened” probably isn’t the most appropriate term––“Stretched along,” “skipped throughout” and “stopped occasionally” are more accurate descriptors. 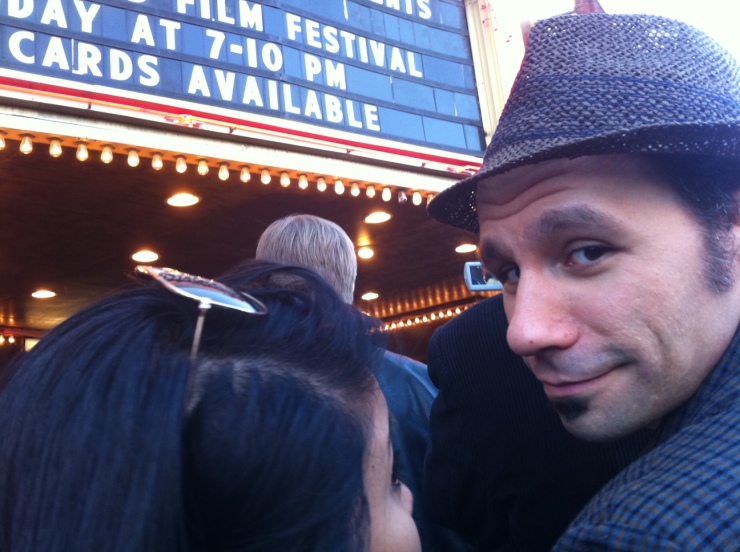 The screening at BFF was nothing short of a disaster, but not so much for Cerise, although we did have our share of mishaps––from being projected in 4:3 instead of its proper aspect ratio of 16:9 with moments of low audio to a handful of skips and pixelation––but my good friends and fellow filmmakers Sam Platizky and Robert Lise, producer and director of the zombie comedy Blaming George Romero of which I’m a proud backer and cameo actor, got the dark brown end of the stick. This feature-length film, which played to a packed house of laughing moviegoers, skipped and skipped after the first 40 minutes or so, then completely froze on a single, horrifying image: 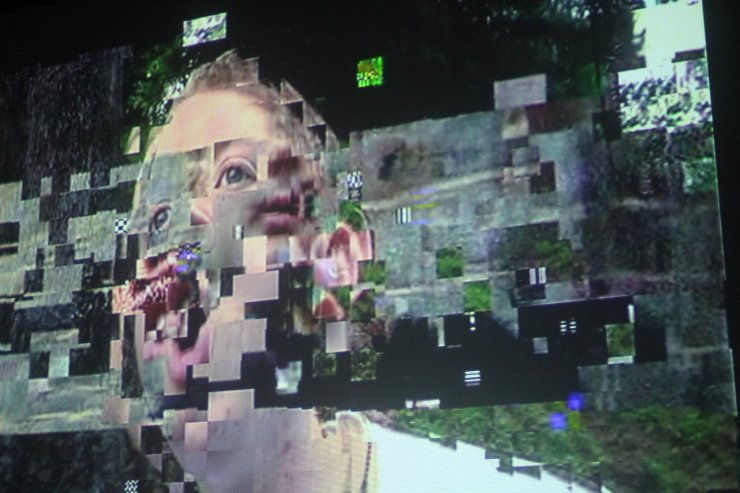 What’s worse is that after a fifteen-minute break (and because of that losing more than half of Blaming George Romero’s audience), the film continued where it left off only to skip and stop during the final twenty minutes of the film, which took a lot longer before the final credit bumper-to-bumpered away.

Now, if you’re a filmmaker reading this, you’re probably shaking your head at this unfortunate fiasco because you know as well as I do that it is completely unacceptable. But I did receive some tweets from film festival programmers who wanted to know all about the wrongs that BFF imposed on us so they might never fall into that easily avoidable pit themselves. So here’s a quick list of five things every film festival should make sure to do before festival time arrives. Some of this may seem like common sense, but apparently common sense is not as common as it once had been.

And here we go!

Watch (in Its Entirety) Each and Every “Official Selection”
As a filmmaker, I’ll be the first to admit that sometimes film festivals can get a bad DVD from us (not all of us can afford DiscMakers, so we opt for Staples brand instead), but if you don’t test it out by watching the film from beginning to end on the exact same equipment you’re going to use during the festival, you run the risk of inviting problems like what happened with Cerise and Blaming George Romero. My disc, which is a copy like all the other copies I’ve sent to every other film festival, worked perfectly fine when I tested it on my seven-year old Coby DVD player at home. So it must be the fact that BFF used a cheap Protron DVD player––a brand no longer in existence––to screen our films from. This brings me to my next point:

Use Up-To-Date Media Players and Projectors to Screen Those “Official Selections”
Protron? Really? I don’t even want to know what brand the projector was, all aslant and standard definition! Please invest in up-to-date equipment; Blu-ray players and HD projectors are the norm at many festivals now, but even if a festival can’t afford to screen everything in HD, DVD players and SD projectors are cheap enough nowadays for anyone to afford, so there’s no excuse not to have some tried and tested names playing and projecting the filmmakers’ work. Believe me, most filmmakers don’t give a darn about laminated badges and sleek programs; all they want is for their films to look spectacular projected on the screen, so screen them on equipment that will keep the integrity of their work intact. Granted, a friend and film festival director informed me that sometimes festivals use “Made in China” players because they can play both NTSC and PAL DVDs, which is a valid point, and understandable. But, we both agreed that it’s only common sense to…

Hire “Projectionists” Who Know Something About Projection
Admittedly, I know very little about projection, but I know enough that if a movie’s playing and it looks stretched, something needs to be fixed ASAP. As soon as Cerise began, I noticed the volume was too low. Easy fix: turn it up. The second thing I noticed was the aspect ratio was wrong. I was willing to let that slide, but once I saw my film start skipping and colorful pixels lighting up around my characters’ heads, I had to leave my own screening and, when I couldn’t track down anyone who knew anything, I spoke with the two older gentlemen manning the projection booth who had no ideas on how to fix the aspect ratio or pixelation. The moral of this part of my parable is to please be sure to hire projectionists who will pay attention to things like stretched picture and inaudible dialog, and who can make tweaks without affecting the audience’s enjoyment of the films at hand.

If You’re Running the Festival, Be Around To Run the Festival
If something goes wrong at a film festival, filmmakers need someone to go to immediately. In this case, the main person at BFF was nowhere to be found when the skips hit the fans. I figured he was either in the theater where his own film was screening or he was watching the movie that the entire evening was blatantly centered around (more about that in a few). The bottom line is that I needed a helping hand, but the crew from Blaming George Romero needed divine intervention, and in both instances this person was MIA, which is inexcusable. At one point we were directed by one of the projectionists to another person, one of the actual festival directors, I believe, but she was just as clueless as they were about the goings on of a film festival. The same way a film can’t be made without a director, a good festival director can make or break a film festival, and if you’re not around, well, it’s broken by default.

Make Filmmakers Feel Like Celebrities (Even in the Presence of “Celebrities”)
Nothing breaks a film festival like bias. This was my biggest issue with BFF. I can confidently say that I speak for all of the filmmakers who were misrepresented that evening when I say we all felt no more special than the audience did in the presence of the director of a film BFF was proud to have acquired. Now, this direct0r’s only real claim to fame is a few appearances on The Soprano’s, but that was enough to warrant a red carpet gala, an incessant speech (with introductions to all his principle cast members), and a live performance of a song featured in the film for no other reason than because the singer/songwriter grew up in Bergenfield. All this, mind you, was done on the street in full view of people sitting in rush hour traffic, and we––filmmakers and audience alike––stood and watched (except Cerise cinematographer Alain Aguilar, who was like “screw this!” and was next spotted across the street enjoying a nice falafel sandwich. 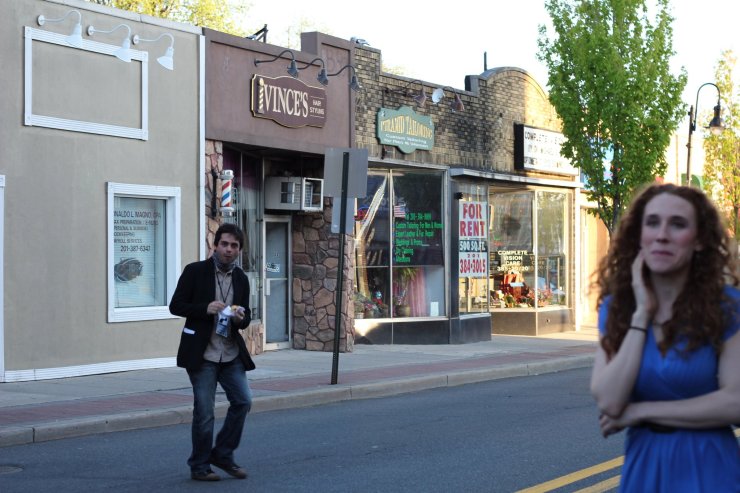 It’s no secret that a film festival is nothing without filmmakers and their films and an audience to enjoy them. At NYC Downtown Short Film Festival, when a director’s present, the festival director asks the filmmaker to say a few words before his or her movie screens. At EgoFest, my face was beamed to the small town of Brainerd, MN via Skype and projected (on top-notch equipment, I’m sure!) onto the big screen for a Q&A after Cerise ended the festival’s first block of short films. At each of these events, whether or not I was present, I felt darn special, and that’s how all filmmakers should feel, regardless of what “real celebrities” may be in attendance.

BFF is the first film festival I’ve ever really had an problem with, except for a Q&A session at Staten Island Film Festival two years ago, in which an obnoxious filmmaker took solipsism to a whole new level by talking about his short film while two other filmmakers were awaiting their turn to answer questions from the audience. But in the case of Blaming George Romero, it was their first film festival experience (for their first film), so the kind of egregious behavior exhibited by BFF is inexcusable and unacceptable and should be avoided by any self-respecting film festival.

As a final note: film festivals, especially young ones, should realize that filmmakers and audiences are their top priority, above celebrity, above workshops and seminars. Above the festival itself even. Therefore, they should screen those films chosen as “Official Selections” with the respect and integrity they deserve. And if they don’t, well, it won’t take long in today’s social media world before every filmmaker knows all about it.

Thoughts? Comments? Write ’em down; I’d love to hear what YOU think! Also, what are some film festival nightmares YOU’VE had the unfortunate displeasure of witnessing, either first hand (as a filmmaker, for instance) or as an audience member?