A martlet is an interesting little bird –– one with no feet that spends all its time flying because it can’t ever land. Lately, I’ve felt very much like a martlet when it comes to my own writing.

I mentioned in my blog post “Riding the Writer’s Road: Three Lessons Learned in Three Months of Writing” that I spent a lot of time resisting the writer inside, passing him off as a hack or a sell out. Since shrugging off this false notion, I’ve become more than “just” a poet and an author. While I’ve been hard at work on my book Crowdfunding for Filmmakers: The Way to a Successful Film Campaign for Michael Wiese Productions and my proposal and first eight pages of my comic series Siren’s Calling, I felt the need to soar into some fresher kinds of writing, just to keep myself actively hammering away at my wordsmith’s blade.

Here’s where and some of what I’ve been writing over the last month or so:

Broken Frontier I’ve been thoroughly enjoying myself as a comics journalist (man, if only that could be a career!), reviewing a few of my favorite titles each month like American Vampire, Batman, Swamp Thing (all three written by my favorite comics writer, Scott Snyder) and Near Death. I’ve also written a review of the first episode of Kevin Smith’s Comic Book Men, as well as a blog about the Robert Kirkman/Terry Moore lawsuit over The Walking Dead franchise and an article about Molly Crabapple’s super successful Kickstarter campaign for her fine art project Shell Game.

Film Slate Magazine
I’ve also written a couple reviews for this top-notch film website and may be reviewing some films from this year’s Tribeca Film Festival, if time permits. You can check out my review for the screenwriting documentary Dreams on Spec and one for an indie film called The Trouble with Bliss, which includes some insightful quotes from an interview I did with actor Michael C. Hall (Dexter) and director Michael Knowles.

Jersey City Independent
So far, I’ve contributed one story for Jersey City’s premiere source for fresh, up-to-the-minute news called “Tachair, Grace Church and Others Help Fill the Bookstore Void in Jersey City” about the lack of a bookstore in my town. Hopefully there will be more articles coming up in the near future once Snooki and JWoww get the hell out of Dodge!

Lamplighter Magazine
A while back, former student and fellow writer Patrick Boyle established Lamplighter, NJ’s alternative art, poetry and culture zine, to which I contributed an article about “How I Joined the Zombie Insistence.” Very soon, my second article, “In Praise of Plastic: The Album’s Last Stand in the 21st Century,” will be featured in the first print issue of Lamplighter Magazine, so I’ll keep you updated on all that. Once I find a bit more time, I hope to add a little more digital ink to the Lamplighter website.

Each of these four websites has proven a solid whetstone for me to keep my writing skills sharpened as I undergo the painstaking process of revision and proofreading on Crowdfunding for Filmmakers. As soon as the manuscript gets sent off to MWP on May 1st, I’ll be diving back into one final revision of my feature-length vampire screenplay A Beautiful Unlife and the second rewrite of my hit man screenplay Caput.

It’s been an intense month with all of this diverse writing I’ve been doing, and, as always, I’ve learned a great deal about the craft of writing, the world around me, and the microcosm of myself. That said, here are five new lessons learned that can help keep every writer soar high as a martlet without any care to land.

Deadlines are Important Although the deadlines I get from Film Slate Magazine and Broken Frontier are soft at best, they’re still deadlines, and having them has greatly improved the pace at which I write. If I write a 200-word review today, I should have something to show for it tomorrow. It may not seem like a lot of words, but for someone who wants 200 of only the best words for his or her review, it can prove quite a challenge, and we writers have to be up to that challenge at all hours of the day or night.

(Cut the Sh*t in Parentheses) Much the way parentheticals –– quick bits of direction from a writer to an actor –– are omitted from most contemporary screenplays, I’m learning how to omit them from my writing entirely. I realized I use them too much, and anything fenced in between parentheses are usually nothing more than the writer’s afterthoughts, and an afterthought, by definition, isn’t worth mentioning since you thought of it after the fact. Keep it after the fact and your writing will stay golden.

Of Editors and Writers When you write for magazines and review sites that love everything you write and post it almost immediately, you get a little spoiled and may start to expect every site you write for to accept your work as is, without question or edit. That said, the article that was published by The Jersey City Independent was not the article I originally wrote. It’s funny, because I constantly preach to my students to never be afraid to “kill your babies” –– all those lovely lines that don’t add anything to your story, article or poem but that you love and don’t want to get rid of –– but when someone else does the killing for you, it naturally feels wrong. Even if it’s done in the most humane way possible, as the JCI editor had done to mine:

I edited out a lot of your beautiful turns of phrase, but some parts of your prose felt a little too florid to me for a news piece. Sometimes I just felt like I needed to whack some adjectives and cut to the chase. I also took out the bit of editorializing you included because I didn’t want to come out and state an opinion.

With the exception of the word “whack,” this is a compassionate explanation, and as much as I understand and agree with the editor’s points, it still hurt when I first saw my abridged news piece. It’s sort of like Candy and his dog in John Steinbeck’s novella Of Mice and Men; he’s hurt after Carlson shoots his old dog instead of doing it himself. At the end of the day, however, when you’re writing (1) news (2) for publishers (3) for a paycheck, the writing isn’t about you anymore, and we have to give the editors exactly what they want, and should be able to kill our own babies before they do.

“The Tao is Forever Undefined,” a Writer Defined Forever A Taoist at heart, I go flow with the invisible current of the Universe in everything I do. The other day I met with a young man who reached out to me on Facebook and offered me what I thought was a job as a social media person. Considering that in another year or two the amount of classes I teach per semester may be substantially reduced due to budget cuts, I decided to entertain this notion as an alternative source of income. Long story short, and after listening to a twenty-minute homily from this young man’s senior officer who was nothing more than a textbook for sales pitches and psychology, I realized this “job” was nothing more than a pyramid scheme. A waste of time? Of course not, for it helped me to see that I could never do anything else but what I’m doing now, which is writing and teaching. And if classes become scarce, I’ll simply have no other choice but to put my writing skills, creative and otherwise, to more lucrative uses, and there’s nothing wrong with that.

Balance is Bliss While I like writing my reviews for Swamp Thing and The Trouble with Bliss as a diversion from my red inking of Crowdfunding for Filmmakers, I still have to balance these new kinds of writing with my own projects, both creative and expository, to keep the worlds I’m working on floating soundly in the galaxy of myself. Luckily, many of the publishers I write for allow me to be creative with my words, and for that I’m thankful, since it helps me deal with those who prefer straight news to my strong editorial biases. But it’s that kind of balance that keeps us writers moving in the forward direction with every piece we pen. 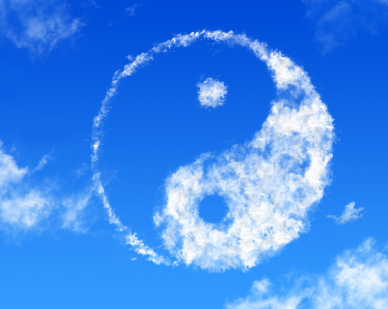 These lessons I’ve learned are lessons we all learn as writers committed to the word trade. Until next post, I’ll leave you with something I tweeted as soon as I left that meeting with the pyramid schemer.