This is also my first blog post as a former professor. Three weeks ago, I launched out into a brand new career with the crowdfunding platform Indiegogo. Some of you may remember that back in 2010, I entered the world of online fundraising with a campaign for my short film Cerise. Since then, I’ve gone on to consult on various film, music, and book campaigns, free of charge, because I felt I had some insights to offer. Ultimately, I wrote a series of blog posts, which lead to my first book, Crowdfunding for Filmmakers, which will be published by Michael Wiese Productions this March.

It seems that my keen knowledge on the subject of crowdfunding, and what people have called my “intense generosity toward others” have paved my path to the Indiegogo offices in SoHo, NY, where I’m in charge of helping get film campaigns on the platform and get them funded, as described by my partner Brad Wyman, who produced a little film called Monster, which won Charlize Theron an Oscar back in 2003. And much the way it was a conversation on Twitter that partially lead me to pitch my book to @FocalPress and @MWPFilmBooks, it was #gogofilm that got me and @IndiegogoFilm talking about taking my skills to the next level.

Brad, as well as Indiegogo co-founders Slava Rubin and Danae Ringelmann, whom I’ve known since the days of my Cerise campaign, and Adam Chapnick, who I finally met at the company’s all hands conference in San Francisco last week, have shown me nothing but the utmost respect, even long before I became Indiegogo’s Vertical Manager for Film, Web & Video (“vertical” is just a fancy term for “category”). During my time as an adjunct professor (or what I called “freelance” because it sounded more dignified), however, there was seldom any respect shown. 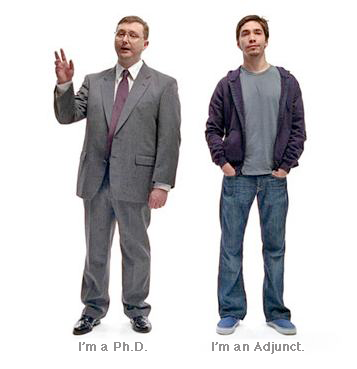 In ten years of teaching in the higher education coliseum, I always got the thumbs down from my colleagues, all except a few select champions, who remain my heroes –– you they know who they are). I even spent a brief semester serving as secretary of the American Federation of Teachers local at my alma mater, and I saw the worst evils Hydden beneath these Dr. Jekyll’s unleashed before my eyes. And the confrontations always came down to a matter of degree: Unless you had a Ph.D., you were merely an instructor, and they hosed us down with reminders, sicked the dogs at us when we tried to speak up.

The only ones who give adjunct professors the respect they deserve are the students. They’re appreciative of all the knowledge we bestow on them. Many of them have never even heard the term “adjunct.” To them, a professor is a professor. Throughout the crowdfunding community, too, I’ve been given a great amount of respect from every friend, Twitter follower, and campaigner I’ve helped out along the bumpy road of crowdfunding by way of blogs, monthly guest posts at Daily Crowdsource, or my BBC spot in which I speak about crowdfunder etiquette.

And for that, I thank you all for helping steer me towards this bright new path where I can still be a professor.

A Tale of Two Professors
My Dad used to frequent the local Path Mark in Weehawken, NJ. Up and down the aisles he’d traverse, laying in his basket only items that were on sale, and all the while being cordial and talkative to everyone he’d meet in those aisles, even when he ultimately lost his voice to cancer. He always induced a smile from the cashiers and stock clerks, and they would open up to him about things that bothered them, both at work and at home. And my Dad, he’d listen. He’d give advice. And before long, he became known at that Path Mark as “The Professor.” No degree required, but a ton of respect.

5 thoughts on “Professors Never Bow Out –– Only in New Directions”